Rat and Mouse Control in the Greater Birmingham, Alabama Area 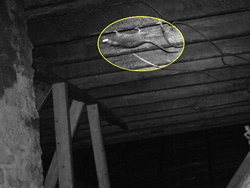 There are many species of rodents, but only three of them are commonly encountered as pests in Alabama: the roof rat, the Norway rat, and the house mouse. Rodentologists and public health biologists refer to these three species as "commensal rodents," meaning that they "eat from the same table" as we do. In other words, they live in close proximity to us and eat the same food as we do. This chart can help you tell the three species apart.

Roof rats are slender, athletic, have exquisite balance, and are skilled at climbing. They're very common in Alabama, and are usually found in attics and walls of homes (although they can live pretty much anywhere near a source of food and water).

Norway rats are stockier than roof rats and usually live in burrows, basements, crawl spaces, and other areas close to the ground. They can climb when necessary, however; so like their cousins the roof rats, they can live pretty much anywhere.

House mice are small and slender and can be found almost anywhere. They have poor vision, so they especially like tight places where they can feel their way around using their whiskers and special body hairs. They don't need to drink free water, so basically they can live anywhere close to food and where they feel cozy and safe from predators.

Squirrels and flying squirrels are also rodents, but are a bit higher on the rodent social scale and are considered "nuisance wildlife," not pests.

This tendency to live in close proximity to humans is a big part of the reason why rats and mice are important public health pests. Rodents are involved in the transmission of a whole bunch of diseases, and their closer they live to humans, the easier it is for most of these diseases to be transmitted.

In other words, rats and mice in a home aren't just a nuisance. They're a health threat. Keeping rats and mice out of your home, therefore, is an important part of protecting your family's health. 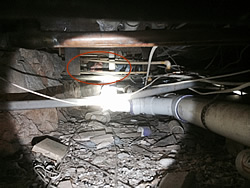 Doing rat control in Birmingham is a dirty job, but someone has to do it.

In fact, rats and mice are among the most significant public health pests. They are directly involved in the transmission of many diseases, and indirectly involved in many more. Rats are also believed to have been the first animal specifically identified as a disease-bearing pest, with references associating rats with disease dating back to biblical times.

Aside from contaminating food and living spaces with their droppings, urine, and shed fur, rats are hosts for a wide variety of insect and other parasite disease vectors. They also serve as reservoirs for many diseases that their parasites spread including plague, Lyme disease, and many others.

Like rats, mice also carry diseases. In fact, despite their small size, mice can actually be more important disease vectors than rats. Mice are smaller than rats and can get through smaller openings, have a smaller home range, don't require free water in their diets, and most often live within a few feet of their food sources. This means that mice are actually more likely than rats to come in contact with humans (or more commonly, our food).

Some of the more notable diseases transmitted by rats and mice include:

Plague. This is the disease that rodents are famous for spreading, of course, seeing as how it wiped out a large part of Europe on several occasions. The bacteria that cause plague, Yersenia pestis, are usually transmitted to humans by fleas that carry the bacterium from an infected rodent to the human. But they can also be spread by handling an infected animal.

Hantavirus. There are several strains of hantavirus, all of which are spread by the droppings or urine of rodents or by coming in contact with infected animals. Exposure can lead to the development of Hantavirus Pulmonary Syndrome, a serious and potentially fatal respiratory disease.

Lymphocytic Chorio-meningitis (LCM). LCM is a serious neurological disease that is spread by breathing dust that has been contaminated with the droppings or urine of rodents, or by coming in contact with nesting materials or other contaminated items.

Some other rodent-borne diseases include leptospirosis, murine typhus, salmonella, rat-bite fever, tularemia, Lyme disease, and many, many others.

In addition to their public health importance, rats and mice are serious economic pests, as well. Among the ways that rats and mice cause economic harm are:

Direct Damage to Property. Rats and mice are gnawers, and they'll gnaw on pretty much anything that's convenient -- including both buildings themselves and stored belongings like shoes, clothing, books, and so forth. They also stain and damage items with their urine and droppings.

Damage to Stored Food, Feed, and Seed. Rats and mice consume millions of tons of stored food, feed, and seed every year, and contaminate millions of ton more with their urine, droppings, shed hairs, and other filth.

Fires. Rodents cause countless fires every year by gnawing on the insulation of electrical wiring. Our techs come across this almost every single day. It's a very serious problem.

Most mouse and rat exterminators use poison bats as their primary rodents control tools. They place the bait in burrow, in walls or ceilings, in crawl spaces, and in bait boxes along runways to kill the rats and mice. Eventually the rodents find the bait; and a few days after that, they die. Sounds like a plan, right? Well, we don't like that plan. Here's why.

Non-Chemical Rodent Control is Safer. When you use poison baits, there's always the chance of poisoning a non-target animal.

Non-Chemical Rodent Control is Environmentally Friendly. Most rodenticides can cause secondary toxicity, which means that the poisoned rodent's carcass becomes poisonous. For example, if a hawk eats a poisoned rat, the hawk could be poisoned, as well.

No Risk of Dead Rodents Stinking Up Your Home. With our non-chemical approach to rodent control, the rodents in your home are trapped and removed, and then your home is made rodent-proof. That means there's no chance of a poisoned rat or mouse dying inside a wall or ceiling and causing odors and insect problems.

More Economical in the Long Run. Non-chemical rodent control system seals rats and mice out of your home, so once it's done, it's done. You don't have to pay a rodent exterminator to show up every month to replace the poison.

Rid-A-Critter specializes in non-chemical rat and mouse extermination. We trap the rodents that are in your home, and then seal up your home to keep rats and mice from getting in. This is called "rodent exclusion" or "rodent-proofing," and it's a much better way of dealing with rodent problems than using poisons.

Here are some pictures of rodent control jobs that we've done in Birmingham and throughout our Metro Birmingham, Alabama service area.

For more information about rodent control or any of our quality services, please call us today for an on-site inspection and consultation.