Gray squirrels are furry rodents with fluffy tails that make them somewhat cuter than their closely-related cousins, the rats. Although usually gray in color, their coloration ranges from white, "albino" squirrels, to almost black.

Gray squirrels are mainly aerial animals who have excellent balance and are comfortable running along tree limbs, roofs, utility wires, and other elevated areas. They frequently descend to ground level, however, to forage for seeds, nuts, and other food. They're especially fond of bird seed and can be quite ingenious about stealing seed from bird feeders.

In nature, squirrels usually live in hollow trees and other natural spaces, which is where most folks wish they'd stay. That's because, truth be told, squirrels are actually kind of cute, and most of us wouldn't mind having them around as long as they stayed out of our homes and went back to a hollow tree to sleep at night.

The problem is that as more and more forests are being knocked down to make room for human expansion, nice, hollow trees are getting harder and harder to find, which leads the squirrels to look toward man-made buildings as places to live. And being the aerialists that they are, they often wind up making homes in our attics, as well as other high places like church steeples, bell towers, and so forth.

The Problem with Squirrels

When squirrels decide to live in attics of houses and in other human-occupied buildings, they immediately create some very serious problems that cause them to wear out their welcomes very quickly.

For one thing, as is the case with most rodents, squirrels and their parasites can carry diseases. Their urine, droppings, shed hairs, fleas, ticks, and other ectoparasites can make for an unhealthful environment because a lot of the pathogens they harbor are airborne and will eventually drift down into the living areas of the home. (If you have a heating or central air-conditioning unit in the attic, then the problem is even more serious.) 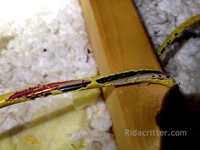 Electrical wires gnawed by squirrels in an attic in Hoover, Alabama

Another problem with squirrels is that, like all rodents, they like to gnaw on things. Squirrels' teeth are sharp and strong enough that they can damage wood, roofing materials, and metal flashing, which can lead to serious damage that is expensive to repair. They also gnaw on items stored in the attic, such as clothing, shoes, furniture, even that ugly lamp your aunt sent you for your birthday a couple of years ago.

One of the worst habits of squirrels is that like other rodents, they like to gnaw on the insulation of electrical wires. Squirrel gnawing causes countless home fires every year, as well as less-severe but still annoying (and expensive) problems like damage to the wiring for doorbells, cable TV, telephones, Internet, and so forth.

Finally, squirrels are just messy. They are the worst housekeepers you'd ever want as tenants. They pull insulation away from the walls and ceilings, make huge piles of nut and seed shells, and poop and pee all over the place. You'd think that in returning for living rent-free, they'd at least take care of the place. But they don't.

Obviously, keeping squirrels out of the attic is very important to protecting your health, your safety, and your home.

Squirrel Removal and Squirrel-Proofing in Alabama

First of all, let's make one thing clear: There's no such thing as a "squirrel exterminator." Squirrels are not considered "pests." They're nuisance animals, which means that they have to be humanely trapped and released, not killed. Anyone in Alabama (and most other places) who calls himself a "squirrel exterminator" and uses poisons to kill squirrels is breaking the law.

At Rid-A-Critter, our approach to squirrel control is simple, yet effective: We remove every last squirrel from your home, and then we go over your house with a fine-toothed comb to make sure that not even the craftiest squirrel will be able to get back in. This is called "squirrel exclusion" or "squirrel-proofing," and it basically means sealing up your house so squirrels can't get in. The squirrels who are already in your home are humanely trapped and released into the wild, preserving family groups whenever possible; and orphaned young or injured squirrels are taken to wildlife rehabilitators.

Sealing a home to keep squirrels out of the house is an easy concept to understand, but it's not so easy to do. Most DIY squirrel-proofing attempts fail, as do most handyman squirrel-exclusion attempts.

Truth be told, you have to be a bit squirrelly yourself to be a good squirrel-control technician. You have to be able to think like a squirrel and find all those nooks and crannies that humans usually don't notice. You also need to understand a squirrel's considerable physical abilities, especially their ability to climb and the impressive strength of their teeth and jaws. Squirrels just laugh at some of the techniques and materials that non-professionals try to use to seal them out of a house. 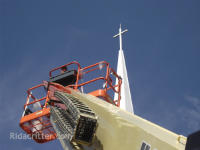 Rid-A-Critter has the equipment and know-how to handle any squirrel-removal job.

In addition, squirrel removal requires more than just a couple of traps and a hammer. Squirrels are aerialists, and to seal them out often requires equipment that most people don't have sitting around in the tool shed. We use long ladders, scaffolding, cherry pickers, bucket trucks, lift trucks, and even rappelling gear to complete squirrel removal jobs.

Finally, squirrel removal is potentially dangerous work. You're working in high places trying to balance all of your equipment and materials, which can be extremely hazardous for the untrained or those without the necessary safety gear.

Long story short, squirrel control is not a job for amateurs. Do-it-yourself squirrel exclusion almost never works, and only winds up costing you even more money in the long run.

So if you have a squirrel problem, do yourself a favor and call Rid-A-Critter instead. You'll get the job done right the first time -- guaranteed. We have the staff, the tools, the equipment, and the know-how to handle any squirrel-removal job in Birmingham or anywhere in the Metro area.

Here are some pictures of a few of the squirrel-removal and squirrel-proofing jobs we've done in Birmingham and throughout the Metro area.

For more information about squirrel control or any of our quality services, please call us today for an on-site inspection and consultation.